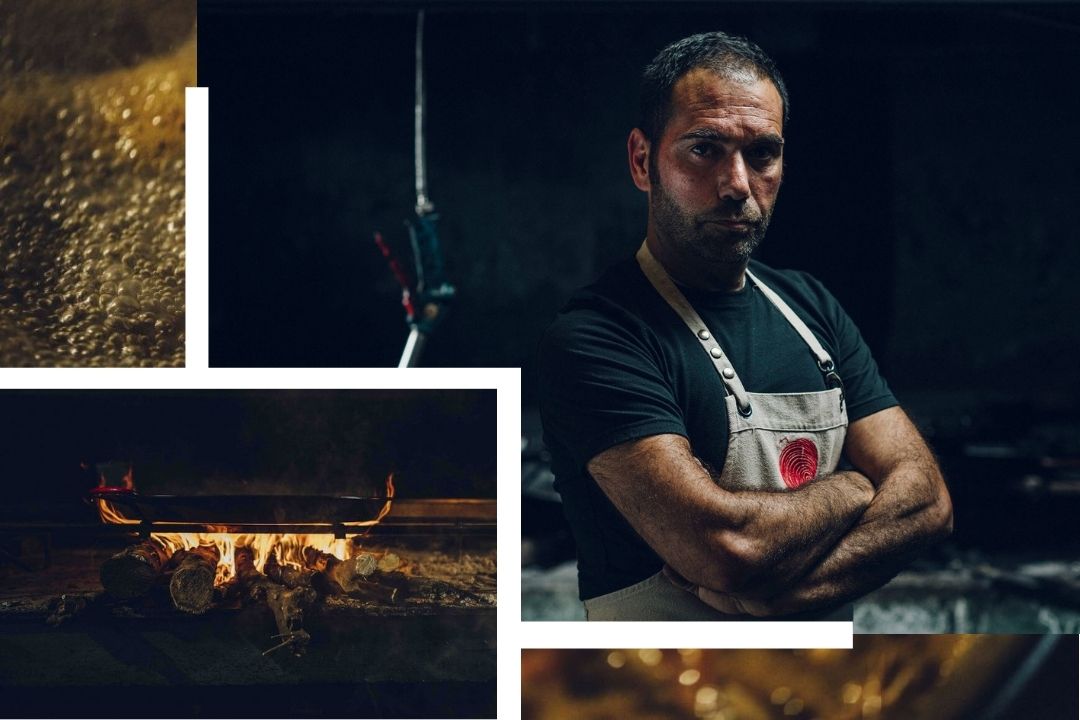 After more than 25 years of experience, Rafa realizes that all his paellas are twins, with the same color, aroma, texture and wonderful flavor. His mastery of fire led him to advise chefs of the stature of José Andrés and Quique Dacosta in their wood-fired paella projects.

The eldest of the Margós, the family that manages the largest paellero in the world, is now launching El Paeller so that you can experience the ritual of Paella in its maximum essence at home.

With an authentic artisan preparation, Rafa jumps and prepares the ingredients for firewood. It interrupts the cooking and conditions it at the ideal moment to retain all its nutritional properties and all its flavor. This is why the preparations you will prepare with El Paeller will be the same as those cooked by a Mestre Paeller with more than 25 years of experience and 300,000 wood-fired paellas.

A little history about Rafa Margos

It was 1989 when Rafael Margós and Ana Benzal decided to make a decision that would change their lives forever.
Rafa was dedicated to working the land to raise her 3 children and Ana was working from what she had come out and helping her husband, but one day the good news came that they were going to be one more, and although very happy, that meant one more nourishing mouth.

So, since Rafa was quite good at cooking paellas for friends, he had the brilliant idea of starting a small take-out paella business right under his house.
At first they started out as orders for specific events such as birthdays or San José, but little by little Rafa and Ana started to create their assiduous clientele who every weekend went to fetch their Valencian paella made from wood. heating to take away.

So, at a time when social networks or cellphones were far from existing, word of mouth was what made a business known, and this is how Paellas Margós was known in Chiva and all the surrounding towns.
Every weekend, a whole family devoted themselves to cooking hundreds of paellas for all the inhabitants of the neighboring towns of Chiva who came to order their rice to eat. The older Rafa, Rodrigo and Marcos were already starting to fry the meat and know the rice cooking minutes, and Pablo, the youngest of them all, helped his mother raise money and knew about everything. what was going on around him.

And so the years passed, between wood fires, mascara and rice, it was therefore inevitable that the 4 brothers who sucked it since childhood did not orient their careers towards the hotel industry.
Rafa did it first, he studied at the hotel school in Santa Pola and quickly became a chef in restaurants such as the Hotel Ignacio or the El Corte Inglés cafeteria. Later he was followed by Marcos who studied at the hotel school in Castellón and did not doubt for a single moment that he wanted to follow in the footsteps of his father and older brother, also working for the hotel. Ignacio or the El Pelegrí restaurant in Chiva.
Rodrigo was initially more reluctant to follow the family saga, and although he first studied enology at the School of Viticulture and Oenology in Requena, he later decided to study teaching, but he quickly realized that what really fascinated him was the wines. he therefore changed course and reoriented his career towards his passion.

And over the years, in 2007 and with Pablo at the hotel school in Cheste, they thought of taking the plunge and creating a wood-fired rice mill, Las Bairetas, where more avant-garde entries were mingled, with no we might as well lose sight of the products, with the rice cooked over a wood fire that they cooked with their parents all their lives.
Of course, the little one of the Margós wasted no time in joining the cast of parents who made up Las Bairetas. Rafa Sr. and Ana focused more on the take-out rice business, which they always have been doing. Rafa fils became the chef for the evening of starters and premieres. Marcos specialized even more in wood-fired and barbecue rice dishes, which over the years will serve as inspiration for cooking products of all kinds. Rodrigo took over in the dining room as a butler and sommelier and Pablo at the end of his studies began to take his first steps in the kitchen.

Although they started just at the onset of the fateful crisis which continues to strike its last legs today, they always knew that with effort and determination they would achieve what they were about to do, like their father did. had made, a reference for the family.
Thus, they continued to fight, adapting to the needs of the customer, but above all by loving what they were doing, cooking with top quality products without disguising it too much or distorting it too much.

It is thanks to this passion that led them to realize more challenges and experiences that catapulted Las Bairetas Chiva as one of the best wood-fired rice cookers in the entire Valencian Community.
Foreign newspapers like The Independent and national newspapers like El Mundo echoed this family of chiefs who were only beginning to give something to talk about.
Later, renowned guides and blogs such as Guide Repsol or Stories with Apron arrived, food critics and chefs who wanted to try these delicious rice dishes. Television programs, documentaries … in short, word of mouth in the 21st century understood that in a small town in the interior of the province of Valencia, something was brewing that made anyone want to repeat it.
Like everything in life, the company has evolved and Rafa Jr. decided to take the reins of a new local Las Bairetas Dénia, to bring to the coast what his father had taught him to do from an early age, an authentic rice cooked over a wood fire.

And Pablo also opened his own restaurant in the center of Valencia, Pelayo Gastro Trinquet, offering cuisine with fresh produce and all kinds of rice dishes.
Las Bairetas Chiva is still in charge of the family, which started as a loophole to be able to feed one more member and today has grown into a benchmark rice factory throughout Valencia.

No recommendations at this time.